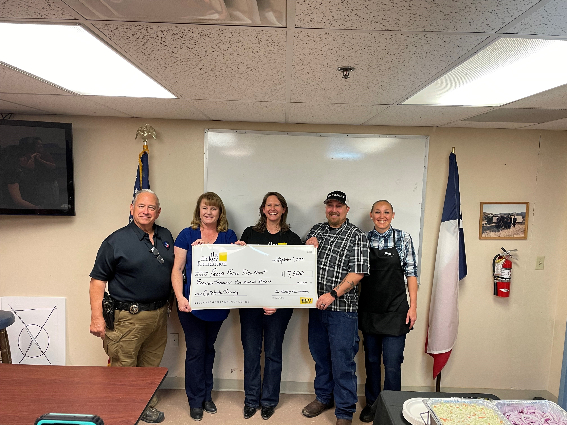 Fighting digital crimes will now be quick and efficient for the Pecos Police Department. Monday, The Dickey Foundation presented a grant check for $7,500 to be used for cellebrite training. This special training will allow the Pecos Police Department to train its own officers to handle digital forensics and get information about crimes quicker and keep it in the department. “We are so glad that the specialized training will help cut down the amount of time it takes to solve crimes and keep everything in the department” says Laura Rea Dickey, CEO of Dickey’s Barbecue Restaurants, Inc.

The Pecos Police Department is currently having to send evidence to the Homeland Security department and wait for them to conduct the investigations. The grant will allow them to send a few officers in for specialized cellebrite training and then they can do all investigations themselves without leaving the department. This will not only save time but add value to the department.

The grant request was brought to The Dickey Foundation by the owners of the Pecos Dickey’s Barbecue Pit Kris and Amy Compton who are very involved in the West Texas community and hope that this grant helps protect the innocent and build and close cases faster.

Dickey’s Barbecue Restaurants, Inc., the world’s largest barbecue concept, was founded in 1941 by Travis Dickey. For the past 80 years, Dickey’s Barbecue Pit has served millions of guests Legit. Texas. Barbecue.™ At Dickey’s, all our barbecued meats are smoked onsite in a hickory wood burning pit. Dickey’s proudly believes there’s no shortcut to true barbecue and it’s why they never say bbq. The Dallas-based, family-run barbecue franchise offers several slow-smoked meats and wholesome sides with ‘No B.S. (Bad Stuff)’ included. Dickey’s has over 550 locations across the United States and six other countries and is on track to have over 600 locations by the end of 2021.

In 2016, Dickey’s won first place on Fast Casual’s “Top 100 Movers and Shakers” list, was named a Top 500 Franchise by Entrepreneur in 2018 and was named to Hospitality Technology Industry Heroes in 2021. Led by CEO Laura Rea Dickey, who was named among the country’s 50 most influential women in foodservice in 2020 by Nation’s Restaurant News and was recognized as one of the top 25 industry leaders on Fast Casual’s 2020 Top 100 Movers and Shakers list, Dickey’s Barbecue Pit has also been recognized by Fox News, Forbes Magazine, Franchise Times, The Wall Street Journal and QSR Magazine. For more information, visit www.dickeys.com.