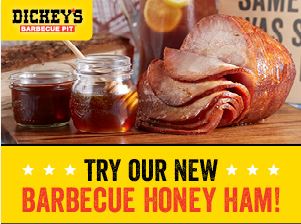 ‘Sometimes opposites attract. Sweet and smoky are unusual flavor partners, but when combined just right they create a mouthwatering combination. Dickey’s Barbecue, the largest barbecue franchise inthe country, has turned the traditional ham on its ear by rolling out a new lean, spiral cut ham that is glazed to perfection with a combination of sweet golden honey and Dickey’s signature hickorysmoke. “We really took our time perfecting the ham recipe before weintroduced it to our customers,” said Roland Dickey, Jr. president of Dickey’s Barbecue Restaurants. “Customers want flavor and our new Barbecue Honey Ham really delivers. It fits in perfectly withour core menu and also offers something new and exciting to our customers.” The new Barbecue Honey Ham is a 6.5 pound ham, spiral cut for convenience and ease of serving.  The ham is availableon a sandwich, plate or as a whole ham. It can also be shipped as a holiday gift. “Our new Barbecue Honey Ham is an excellent choice for the holidays or family dinners,” said Dickey. “We’ve tastedwhat’s currently in the market and, to me, nothing compares to the juicy and tender ham we are offering– it’s my new favorite thing on the menu!” Dickey’s Barbecue Honey Ham is now available in theDallas-Fort Worth area and will roll out nationwide later this year.  ‘