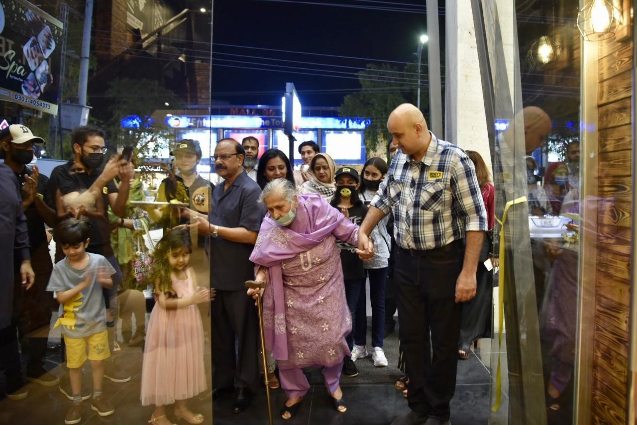 “Dickey’s Barbecue Pit is proud of the work Mazhar Ziadi, our master partner in Pakistan has done to drive the opening of our first location in Pakistan, Islamabad.” Says Jim Perkins, Executive Vice President of International Sales and Support for Dickey’s Barbecue Pit. “Under normal conditions opening a first location in a distant land is based on commitment and teamwork. Mazhar and his team forged forward under extreme Covid19 conditions and opens our Flagship store in Pakistan, I am proud of him, his team, and Dickey’s Regional Manager in Dubai, Mansoor Saeed who made this available to the guests in Pakistan”. Adds Perkins.

Since the barbecue chain opened their first overseas locations in Dubai and Abu Dhabi in 2018, this new deal now marks the 6th international location for the world’s largest barbecue concept who plans on opening in Cairo, Egypt in August of 2021.

The A.J. Corporation acquired full franchising rights for Pakistan that includes a total development of 20 stores spread out over the next 10 years and plans to offer a variety of menu items, delivery, and catering options at their first location.

“We have a love for barbecue, because of its unique taste and we are excited to introduce Pakistan to Dickey’s Legit. Texas. Barbecue.,” says Azam Bhatti, founder of the A.J. Corporation.

Dickey’s Barbecue Restaurants, Inc., the world’s largest barbecue concept, was founded in 1941 by Travis Dickey. For the past 80 years, Dickey’s Barbecue Pit has served millions of guests Legit. Texas. Barbecue.™ At Dickey’s, all our barbecued meats are smoked onsite in a hickory wood burning pit. Dickey’s proudly believes there’s no shortcut to true barbecue and it’s why they never say bbq. The Dallas-based, family-run barbecue franchise offers several slow-smoked meats and wholesome sides with ‘No B.S. (Bad Stuff)’ included. The fast-casual concept has expanded worldwide with international locations in the UAE and Japan. Dickey’s Restaurant brands have over 550 locations nationwide. In 2016, Dickey’s won first place on Fast Casual’s “Top 100 Movers and Shakers” list, was named a Top 500 Franchise by Entrepreneur in 2018 and was named to Hospitality Technology Industry Heroes in 2021. Led by CEO Laura Rea Dickey, who was named among the country’s 50 most influential women in foodservice in 2020 by Nation’s Restaurant News and was recognized as one of the top 25 industry leaders on Fast Casual’s 2020 Top 100 Movers and Shakers list, Dickey’s Barbecue Pit has also been recognized by Fox News, Forbes Magazine, Franchise Times, The Wall Street Journal and QSR Magazine. For more information, visit www.dickeys.com.