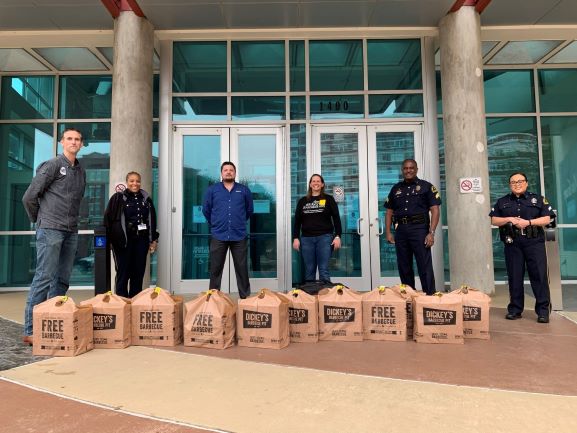 The Dickey Foundation Donates Free Barbecue to First Responders Across the U.S.

“While many of us are able to work from home amid the coronavirus outbreak, we wanted to say thank you to our first responders who are still showing up and doing their part to protect their communities during this sensitive time,” says Betsy Orton, Executive Director of the Dickey Foundation.

This foundation sets out to provide safety equipment and overall support for local first responders. Although its reach is national, the efforts are extremely local and supports several programs, including Invest in a Vest, a program providing life-saving equipment for law enforcement officers.

Donate to The Dickey Foundation here.

About The Dickey Foundation

The Dickey Foundation, formerly known as Barbecue, Boots and Badges, supports first responders in communities across the United States. The foundation provides safety equipment such as helmets, shields, respiratory masks and overall support for local first responders. Although its reach is national, the efforts are extremely local and supports several programs including Invest in a Vest. For more information, visit https://www.thedickeyfoundation.org/.

Dickey’s Barbecue Restaurants, Inc., the world’s largest barbecue concept, was founded in 1941 by Travis Dickey. For the past 79 years, Dickey’s Barbecue Pit has served millions of guests Legit. Texas. Barbecue.™ At Dickey’s, all our barbecued meats are smoked on-site in a hickory wood burning pit. Dickey’s proudly believes there’s no shortcut to true barbecue and it’s why they never say bbq. The Dallas-based family-run barbecue franchise offers several slow-smoked meats and wholesome sides with ‘No B.S. (Bad Stuff)’ included. The fast-casual concept has expanded worldwide with 2 international locations in the UAE and operates over 500 locations in 44 states. In 2016, Dickey’s won first place on Fast Casual’s “Top 100 Movers and Shakers” list and was named a Top 500 Franchise by Entrepreneur in 2018. Dickey’s Barbecue Pit has also been recognized by Fox News, Franchise Times, The Wall Street Journal, QSR Magazine, Forbes Magazine and Nation’s Restaurant News. For more information, visit www.dickeys.com.