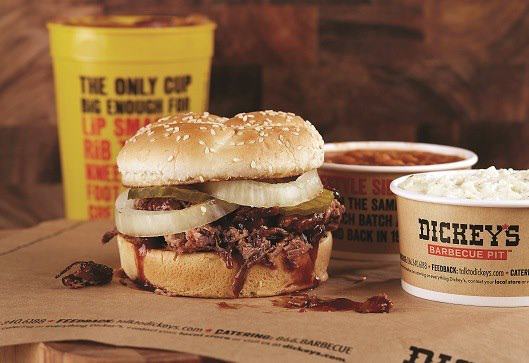 (Billings, MT) Dickey’s franchise owner Ray Russell has something to celebrate. Russell was the first to bring Dickey’s Barbecue to Montana and is celebrating with his local community in Billings. On Friday, June 21 Dickey’s will be offering $1 Pulled Pork Big Barbecue sandwiches from 11 a.m. to 1 p.m.

“There are so many great people in this community and we couldn’t think of a better place to own a business,” said local owner Russell. “We look forward to seeing everyone out on Friday.”

Russell was born in Butte and has spent most of his life there. After retiring from the Butte-Silver Bow government, he joined the Social Security Administration Office as a contract guard and has been there for over 10 years.

Join CAT Country 102.9 as they entertain the hungry crowds and help announce three winners of barbecue for a year. Dickey’s is located near the heart of the commercial district in downtown Billings, one block from the Crown Plaza Hotel. The store phone number is 406-969-3909.