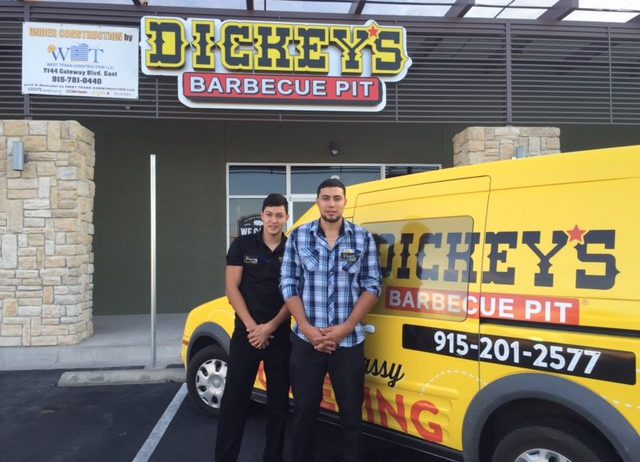 The new Dickey’slocation will celebrate the grand opening with four weeks of specials andgiveaways, including free barbecue for a year for three lucky guests

(El Paso, TX) Dickey’s Barbecue Pit will open in El Paso this Thursday with four weeks ofgiveaways. Three lucky guests will win free barbecue for a year, available onlyat the new location. To enter to win, guests can either use hashtag #1FreeYearofBBQ on any social mediapage, order online or sign up for the  BigYellow Cup Club to receive loyalty pointsand members-only specials. The new Dickey’s location will also offer a specialtreat to the first 50 guests in the door on Thursdays for the next four weeks.On Fridays, the new store will offer 50 percent off meals for uniformedresponders, and guests will have the opportunity to donate to Dickey’scharitable foundation, Barbecue, Boots& Badges.

The month of October is Dickey’s 75-year anniversary, complete withsmokin’ good deals! You can find more about these amazing deals and member-onlyspecials, here.

Doors open this Thursday and guests can enjoy the grand opening eventsover the next four weeks:

Born andraised in El Paso, Gonzalez is not new to the delicious food that Texas has tooffer. After spending years in the trucking business with his father, hedecided it was time to open his own restaurant and bring authentic, slow-smokedTexas-style barbecue to the great people of El Paso. The El Paso location willbe the first of many other locations to come that are opened by Gonzalez. “I’m excited to open this Dickey’slocation because I want to bring an authentic style of barbecue and restaurantto El Paso,” says Hugo Gonzalez.

About Dickey’s Barbecue Restaurants, Inc.
Dickey’s Barbecue Restaurants, Inc., the nation’s largest barbecue chainwas founded in 1941 by Travis Dickey with the goal of authenticslow-smoked barbecue. Today, all meats are still slow smoked on-site in eachrestaurant living up to the company tagline, “We Speak Barbecue.” TheDallas-based family-run barbecuefranchise offers a quality selection of signature meats, home style sides,tangy barbecue sauce and free kids’ meals every Sunday. The fast-casual concepthas expanded to more than 560 locations in 43 states. This year Dickey’s wonfirst place on Fast Casual’s “Top100 Movers and Shakers” and ranked in the top ten of Franchise Times’ “Fastand Serious.” Dickey’s Barbecue Pit wasrecognized for the third year by Nation’s Restaurant News as a “Top 10 GrowthChain” and by Technomic as the “Fastest-growing restaurant chain in thecountry.” For more information, visit www.dickeys.comor for barbecue franchise opportunities call 866.340.6188.