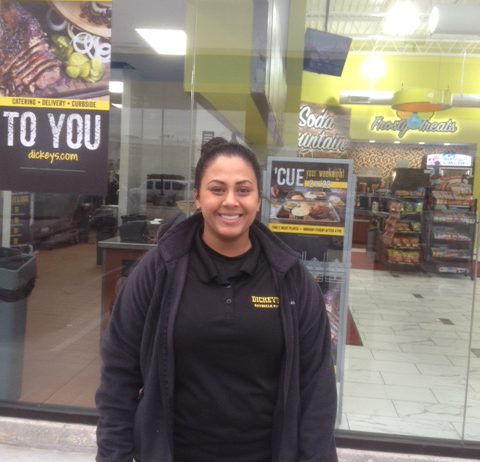 (Houston, TX) Local entrepreneur Kiran Momin opens her second Dickey’s Barbecue Pit location in the Houston area today with four weeks of specials and giveaways. The new location is owned by Kiran and her two brothers, Asif and Anil Momin.

As current Dickey’s Barbecue Pit owners, the Momins know what it takes to make Dickey’s delicious, slow-smoked barbecue and look forward to opening their new location next to their local Chevron. When the Momins opened their first Dickey’s location in early 2017, they were new to the restaurant industry. With the support of their community, they were extremely successful and look forward to bringing that success to their new location.

“We are proud to have franchisees such as the Momins as a part of our ever-growing Dickey’s family,” says Laura Rea Dickey, CEO of Dickey’s Barbecue Restaurants, Inc. “Owning a non-traditional Dickey’s location, such as one next to a Chevron, casts such a wide net of potential guests, I look forward to seeing the Momin family’s success.”

Born and raised in Houston, the Momins look forward to bringing more Dickey’s barbecue to the folks in their community that they consider family. “At Dickey’s, we pride ourselves on only serving the best Texas style barbecue and we are thrilled to continue doing just that in our new location for years to come,” says Kiran Momin.

Find the location nearest you here.

Dickey’s Barbecue Restaurants, Inc., the nation’s largest barbecue chain was founded in 1941 by Travis Dickey. Today, all meats are still slow smoked on-site in each restaurant. The Dallas-based family-run barbecue franchise offers several slow-smoked meats and home style sides with ‘No B.S. (Bad Stuff)‘ included. The fast-casual concept has expanded to more than 550 locations in 44 states. In 2016, Dickey’s won first place on Fast Casual’s “Top 100 Movers and Shakers” list and in 2017 again won a top 10 on the list. Dickey’s Barbecue Pit has also been recognized by Entrepreneur Magazine, Franchise Times, and Nation’s Restaurant News. For more information, visit www.dickeys.com