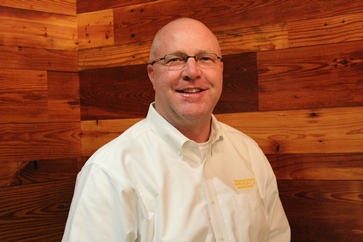 “I enjoy working with manufacturers to develop products that differentiate Dickey’s from other restaurant concepts and then working internally to be sure that the value of those products is expressed to both franchisees and our guests,” said Jeff Forrester, Vice President of Purchasing and R&D. “I grew up in the Dallas area and Dickey’s has always been an iconic brand that I identify with home.”

Born in Wylie, Texas, Forrester, age 47, began his career at Dickey’s in August 2011 as the Director of Purchasing. Forrester went to Tarleton State University and the Art Institute of Dallas. Forrester was appointed Executive Chef/Culinary Director for “Food Network Live” and then went on to be the Executive Chef/Culinary Director for the Culinary Entertainment Group. Forrester’s career has allowed him to cook with esteemed chefs like Brian Tolbert, Emeril Lagasse, Alton Brown and Kent Rathburn and he even prepared meals for Julia Child.

“Since joining Dickey’s, Jeff has been instrumental in driving the brand’s culinary development including adding new menu items such as the Spicy Chicken Sandwich and the Barbecue Honey Ham,” said Roland Dickey, Jr., president and CEO of Dickey’s Barbecue Restaurants, Inc. “We have great confidence in Jeff’s ability to continue to develop systems that will catapult Dickey’s to the next level.”