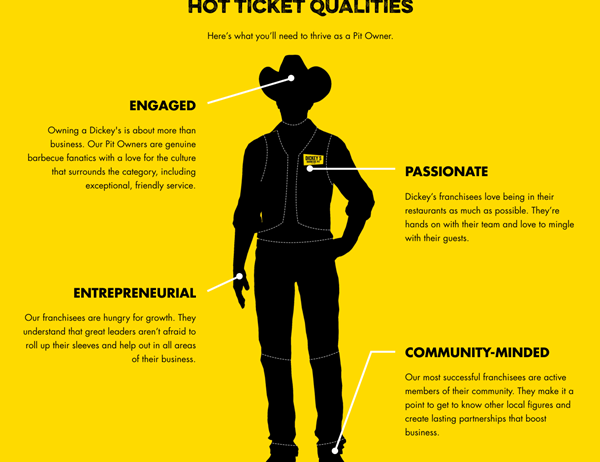 “Finding a franchise opportunity can be daunting and our goal is to highlight all of the opportunities available at Dickey’s to help make that decision process easier for new prospects,” said Roland Dickey Jr., CEO of Dickey’s Capital Group. “The new website is modern and engaging, and it better reflects Dickey’s brand voice, story and the entrepreneurial advantages of owning a Dickey’s franchise. We couldn’t be more thrilled to launch this improved experience for our current and future franchisees.”

In an ongoing effort to seek out qualified partners across the globe, Dickey’s has engaged in a partner search through the International Partner Search (IPS) vehicle sponsored by the United States Department of Commerce. The barbecue franchise, with more than 500 locations, opened its first international locations in Dubai and Abu Dhabi in 2018 and has since expanded its overseas footprint to include developments in Brazil, Egypt, Pakistan and Georgia.

In 1994, the Dallas-based Dickey’s Barbecue Pit began franchising and offering veterans a 25% discount off their initial franchise fee. In that time, Dickey’s grew to become the world’s largest barbecue franchise and in 2019 was recognized as the Global Franchise Award Winner in the Food and Beverage Category.